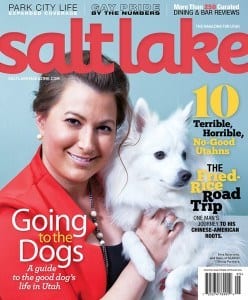 Ema Ostarcevic arrives at work looking like a perfectionist professional, which she is. Chief Executive Officer of SEARCH Group Partners (SGP), a boutique recruiting firm with offices in Utah and Tennessee, this year she was named one of Utah Business Magazine’s “Forty Under 40.” In 2014, she won a Bronze Stevie Award in the Young Entrepreneur of the Year category for Women in Business. She steps into her Trolley Corners offices intimidatingly turned out in high-heeled pumps, a sophisticated up-do, and her favorite accessory: Duke, a Miniature American Eskimo dog, who is as well-groomed as Ostarcevic.

She’s not the only one in the office with a canine companion. A colleague frequently brings her Boston Terrier, Smithe, to work with her. In fact, on a given day, five tails could be wagging in the office. SEARCH has a detailed dog policy.
“We think staff morale and therefore productivity increases when people are allowed to have their dogs with them,” says Ostarcevic. “It’s relaxing.” Of course, there are rules—like, aggressive dogs are not welcome. Dogs must be toilet trained. (Three “accidents” and a dog is no longer welcome.) Dogs must be quiet, well-behaved, clean, vaccinated and insured for liability—when you think about it, that’s more than you expect from your human co-workers. 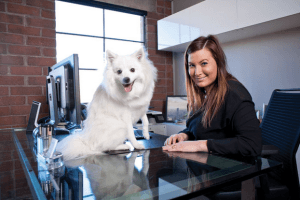 A dog-friendly policy like the one at SGP is becoming more and more common, as dogs move from being outdoor pets to family members. More than half of Utah households own pets, according to the American Veterinary Medical Association, 29.4% of which are dogs. Dogs seem to be everywhere, more respected than humans (understandable), better nurtured than many humans (arguable) and as noted above, often better-behaved. A good example of where dogs rank in our society: When James Barker was killed by a Salt Lake police officer last fall, “dozens” turned out in protest. But when a Salt Lake City cop shot Scott Kendall’s Weimaraner Geist—hundreds marched in outrage. Utah Highway Patrol’s chase after a little Pomeranian loose on Legacy Highway brought traffic to a stop—meaning the dog got more consideration than some Highway Patrolmen. (Several troopers were nearly killed this year by speeding motorists.) One of the few lauded laws from last year’s legislative session took effect Jan. 1, 2015: Cities are prohibited from prohibiting certain species of dogs. (Pit bulls unite!) A Utah dog, a 12-week-old toy rat terrier named Spot, made national news when it became the unofficial mascot of the Woods Cross Police Department—pictures of a burly uniformed policeman giving Spot a kiss went viral.

Finally, Utah the legislature took time to consider a bill proposed by South Jordan Daybreak Elementary fourth graders that would make the Golden Retriever Utah’s state pet. You might think that there were more important issues to address at the Capitol, but in today’s pet-obsessed society, dogs are people, too.
That’s why we’ve put together a selected list of Utah’s dog-friendly restaurants, top dog daycares, special dog-centric events and the latest must-have dog accessories—in short, everything you need for the good dog’s good life.
The Executive Dog

“I never wanted to be one of ‘those’ dog owners,” says Ema Ostarcevic. “One of those who leave their dog at home 12 hours a day.”

So she waited to get her dog Duke, a miniature American Eskimo dog, until she owned her own business. “He’s always been a working dog,” Ostarcevic says, brushing the white dog hair from her otherwise impeccable pants (not that Duke doesn’t arrive at the office as impeccable as his owner, er, co-worker.) Ostarcevic believes her company’s pet-friendly policy is an important part of team building. “Dogs break down barriers. Everyone can find common ground talking about their dogs.” It’s an extension of her philosophy of supporting a healthy work/life balance among her employees-–which is an extension of her chosen career: finding the same kind of satisfying work for other people.