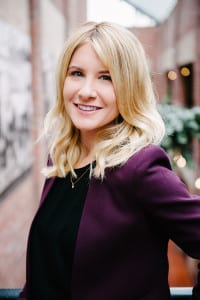 Anne has a passion for tapping into networks to identify the best talent for a given role. She understands fast-growth, changing environments and rapid expansion. She is experienced in building companies from the ground up. In her world, building a team from one to 60 is just as exciting as Christmas morning. She has extensive experience placing senior level roles for Legal, Finance, Accounting, Operations, Marketing, and additional departments.

Prior to SGP, Anne oversaw and led hiring efforts for Vivint Solar. She managed a recruiting team and partnered with executive teams to execute hiring strategies, which included expanding the company from 500 to 2,700 employees in one year. Anne was also a Staffing Manager at Robert Half International where she placed professionals with a variety of companies in the Salt Lake Valley. She earned her Bachelor’s in Communication from Westminster College with an emphasis in Journalism. And Anne has been able to apply the interviewing skills she learned from her major throughout her career.

“People are more than their resumes. When you’re interviewing them, you’re looking for personality traits and how they’re going to fit in with a company’s culture,” Anne says. “You’re getting to know a person better to help place them in the right job.”

If you catch Anne out of the office, you are most likely to find her in the mountains. She is an avid camper, traveler, hiker, swimmer, and recent fly fisher. If there is any downtime, she is planning her next adventure whether it’s a trip to Spain or somewhere closer like Capitol Reef National Park.